Written on their Psyche... 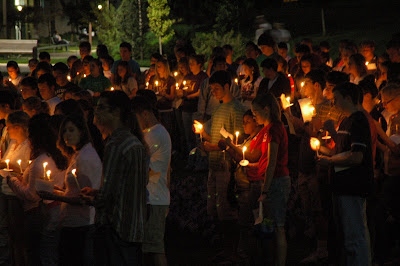 They walked down the sidewalks in small groups, some were coming from practice, others carried their laptops, a few even got dressed up, all were respectful, some who stumbled upon the event joined in, others made an extra effort not to disturb and when the National Anthem was sung even those passing by stopped and faced the flag before continui 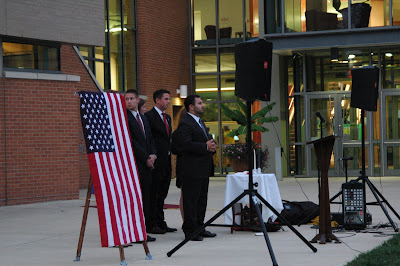 ng on their way.

It's been 7 years since that September day and every year our students have gathered in prayer someplace on campus. After year 5, I thought interest would fade, obviously it didn't. When we didn't plan anything that year, they did it themselves, in the back of Spellman Hall on the Rugby practice field,. There is always a significant crowd. Matt Patella is one of the perennial organizers. (Good Job Matt)

Tonight I saw everyone represented from Freshman to Seniors, staff and faculty they were all there simply to remember. They wanted to remember the almost 3000 people who lost their lives some even spoke their names. They wanted to remembered the heroic efforts of the first responders, and the generosity and charity that seemed to flow so easily on such a sad day. They spoke about how they all remembered where they were on that day when many of them experienced the effects hate and terrorism for the very first time. 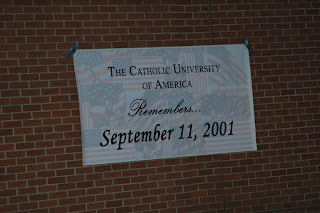 When you think about it it's not hard to understand why it is impossible for them to forget that day those moments of fear and compassion, cowardice, and heroism. They like all of us lost a little bit of our innocence on September 11th 2001 it is written on their (our) psyche indeed.

I was in the Campus Ministry Lounge watching
ABC's coverage on our Office Television..
It seems like yesterday !!! Where were you ?
Posted by Fr. Bob at 8:27 PM