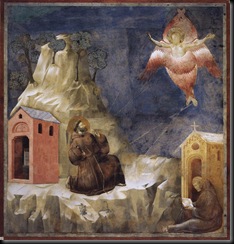 One day toward the end of his life Francis was huddled in a cave on Mt.  Alverna.

He was lost in contemplation, meditating on his own sins, the suffering of Christ and how much he was loved by God.

He had finally fallen in love with God and this desire to suffer was motivated by his love.

Suddenly while lost in prayer Francis received an incredible gift a 6 winged angel appeared to him and in his hands and in his feet and in his side appeared the wounds of Christ.

Many believe that the stigmata was God’s final approbation of Francis, his life, his dreams and his brotherhood.

The stigmata was God’s final stamp of approval of the little man from Assisi  who had tried so hard to imitate Christ that many called him an “alter Christus” or like another Christ.

You know when I would explain this to the exhausted pilgrims who would come to the Basilica of St. Francis in Assisi on their tours many would turn away or roll their eyes. Some would come right out and say… “That’s weird” or “Too weird for me.”

They could understand poverty and the importance of placing one’s trust in God.

They could understand the importance of not being owned by our possessions.

They could understand obedience and how all of us are called to surrender our wills to God and to God’s plan for us.

But the Stigmata was just too much for them to take so I tried to  show them how much suffering love is already been a part of all of our lives.

How about our parents who would get up in the middle of the night when we were sick? (suffering love indeed)

Many years ago  a kid in my office who was being sent home.

I spent three days trying to convince him to call home.
When he did his father lost it and there was lots of screaming and yelling.

When the kid got home there was more yelling and fighting and they even shoved each other. It was horrible.

This was not a very common site.
The kid could not remember the last time his Dad ran.

He said to his son get up we are going to run.
There was no explanation.
Rather than fight again the kid surrendered.

At first it was easy but then the kid noticed that his Dad was getting winded.

It started to bother the son when he looked over at his Dad and saw he “sucking air”.

After a while the young man began to worry about his father.

Finally when they came to the bottom of a huge hill the son just could not let his Dad run anymore.

He grabbed his father and said why are we doing this?
It took a minute for his Dad to speak.
When he caught his breath he said
“I was horrible to you last night, we were horrible to each other”

I couldn’t sleep last night.
I had to figure out a way that I could convince you that I loved you.

I knew the only way I could prove it to you was to suffer for you.
So I was going to keep running until you stopped me or I fell over.

And we are going to face all of this together.

I’m your Father, you are my son  and I should have never lost my temper.
I’m sorry.
I will never speak to you like that again.

May all of us like St. Francis fall in love with God

May all of us spurred on by our love for God love each other more and more.

May the redemptive power of a love willing to suffer change our hearts.