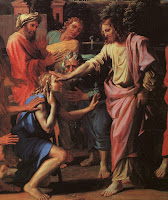 May the peace of Christ Reign in our hearts.

As we know at this point in his ministry Jesus was on his way to Jerusalem.

In Jerusalem he would institute the Eucharist,
he would be deserted by his friends,
and he would face the agony of the cross for our sins.

With this passage in the Gospel of Mark the journey is almost over.

Jericho is about 15 miles from Jerusalem, less than a ½ day’s journey.

He had travelled for so long.
He had preached to so many.
Along the way, moved by compassion, he healed people over and over again.

By now Jesus was famous as word spread that he was passing through a town often a crowd would gather.

When Jesus entered Jericho that seems to be what happened.

It was probably a crowd like the one that would greet him as he entered Jerusalem.

There were probably people in both crowds who would later call for his execution yet Jesus walked on.

Bartimaeus was a blind man he was forced to live by begging.

He knew that something different was happening that day but he didn’t know what.

Maybe he heard a different excitement in the crowd.
Maybe he could feel the vibration of the crowd’s feet as they passed by.

Bartimaeus had very few chances for a better life.
His future was not bright.

Unless there was a miracle he would probably spend the rest of his life begging on that road to Jerusalem.

When he asked what was going on and was told that Jesus was passing by his reaction shows
that he had heard of Jesus of Nazareth and believed in him.

He knew that he had a chance to be made whole.
It was a chance he had to take and could not squander.

He knew he had to seize the moment this incredible moment of grace.

He wasn’t sure exactly where Jesus was in the passing crowd, so he just started shouting, shouting as loud as he could in the hope of being in heard over the crowd.

He yelled it over and over again.

By choosing those words he proclaimed to everyone who heard him that he believed that Jesus was the Messiah.

He publicly bet all his hopes on Jesus, he went completely in as they say in poker.

That was no small risk, remember he depended on the good will of the people of Jericho and many of the religious leaders did not believe Jesus.

Bartimaeus made so much desperate noise that the people around him yelled at him to be quiet, yet he persisted… he knew he had no other choice.

Bartimaeus knew that once Jesus was gone there would not be another chance to be healed.

His blindness, his weakness would not permit him to follow Jesus into Jerusalem.

He called to him and without hesitation Bartimaeus jumped up and threw off his cloak.

His cloak kept him warm,
he probably hid his food in it.
It served as his bed and his blanket as he faced the night’s cold.
It was probably one of his most valuable possessions but it was hard to run with so he threw it away.

And when Jesus asked him what he needed, he knew right away.
There was only one thing he could possibly ask for.

He asked to see so that he could continue to follow Jesus as he went to Jerusalem.

Would we have even noticed that Jesus was passing by or would we have been lost in our own problems and concerns?

Would we have persisted in our faith if people yelled at us to shut up?

Are we willing to publicly place all our hope in Jesus like Bartimaeus did?

If we were Bartimaeus would we have been willing to leave the security of our cloak or our possessions to run up to Christ.

If Jesus walked by today what would or what should we leave behind?

If Jesus came right now and asked us what do you want me to do for you?

Would we ask for the right thing ?
Would we know what to ask for?

Think about it if Jesus was here right now what would you ask for?

And once we received our wish would we go our separate way or would we remain faithful?

Would we follow Jesus even to Jerusalem and even to the cross?

The Gospels are filled with examples of people who dared to believe.

The example of Bartimaeus the blind man along the road in Jericho challenges us to do the same.

Are we brave enough to seize the moment like Bartimaeus.

I guess that’s the question of the week or maybe even most important question of our life.