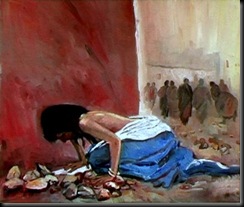 Once upon a time… there was a young man who turned 21 and so his friends wanted to give him a gift.

As they gathered in an off-campus house the room was filled with expectation they had already been drinking for an hour when the doorbell rang.

When they answered the door a very tall beautiful woman walked in.

There was no doubt what she had been hired to do.
The room erupted into applause and shouts all of the young men got ready for her performance.

She put down the cd player she was carrying and turned it on
As she began to “Dance”
One of the young men told me the place went wild.

Then all of a sudden one of the men in the back of the room fell silent
The woman doing the “entertaining” looked familiar.

He wasn’t completely sure.. but pretty sure that he had gone to grade school with her and that they had been in 4th grade together.

He hadn’t seen her in years.
He didn’t know what to do
He tried to watch her more closely
and then their eyes met and there was a flash of recognition in her face.

Later she told him she was panicking inside because she recognized him and didn’t know what to do.

As she danced on, the young man’s mind raced back to the memories of their youth and all the happiness and innocence they had enjoyed.

He remembered what she looked like in 4th grade when they were in the same class.

He pictured her running around on the playground.
Just as she was about to make her dance more interesting to the gawkers,
He could take no more,
and he stood up and he covered her with his sweatshirt and escorted her out of the room.

Everyone was yelling at him he yelled back at them to shut up and that he knew her.

He took her to the back of the house and turned his back as she got dressed.

He hugged her and she began to cry in his arms.

He stood up because he knew she was a person,
someone’s daughter,
someone’s sister, and his friend.

He remembered her as a beautiful little girl.
He understood she was person not a thing,
not an object,
and he was ashamed of himself and how he had acted before he recognized her.

She cried in his arms because she also understood that she was a person,
not a thing or an object
even though she had been acting like one.

She understood that she had been using the men in the room as much as they were using her.

He went back into the room…
and started to gather up the rest of her stuff
it was really awkward.

Some still were angry,
Some had left,
It was clear that others were also ashamed.

It seemed that a lot of the young men had finally understood what had happened..

No one yelled at him as he gathered her clothes and CD player.

Then he took her out the back door so she would not have to pass by them again and she drove away.

I’m not sure if they ever saw each other again…

I don’t know how the story ended.
But I do know what happened on that 21st birthday and it was powerful.

The men in the gospel did not see the woman caught in adultery as a person
she was not important to them.

They felt that her sins had somehow removed her humanity and her dignity.

The men in the Gospel felt justified in using her because she was damaged goods.

As the woman caught in adultery stood there before all of them
filled with fear and ashamed.

Jesus simply held up a mirror so that all of the men
who were filled with anger and self righteousness in their hearts,
and all of the men with stones in their hands
could see and understand that they themselves were really not much better than her.

The oldest men left first because they had the most sins.
No stones were thrown that day.
Just like the dance was not completed at that party.

At that birthday party and in the field.
They all left in silence.

You know it is so easy to get fired up about other people’s sins.

It is so easy to think ourselves superior, better than others.

It is so easy to lose sight of the humanity of poor and the broken the addicted, the fallen sinners, those in our jails, even the sexual sinners.

How often do we refer to people as losers.
And if we don’t say it sadly we often think of it.

The questions that the Gospel forces us to ask ourselves are two fold.

The second is just as hard,
Would we have enough love to stand up and  cover up someone else’s shame?

Would we have to courage to stand up and say I know her.

The young man helped his friends see the woman’s humanity
Jesus helped everyone present see the humanity of woman caught in adultery.

Jesus also made them see themselves.

Let the one among us without sin cast the first stone.

Thank you for this commentary. I have been having trouble not judging other's sexual sins. I think you wrote this for me!