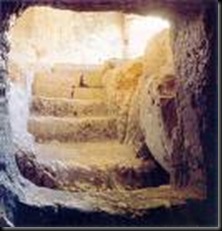 Can you imagine their anticipation and their fear as they gathered to begin their journey?

Moses had convinced Pharaoh to let them go pray in the desert.
They all knew they would never come back.
The secret had been whispered over and over again in hushed voices.

As bad as their life was in Egypt it was all that they knew and now they were beginning something completely new both wonderful and unknown.

There was a rush of emotion in their hearts.
They were excited and worried,
afraid and ecstatic,
sad but filled with hope.

There may have even been a few tears as they left the homes they had always known and the graves of their loved ones.

And when they had left the cities of the Egyptians in the distance their hearts began to calm and they began to hope for something better.

All of a sudden someone noticed a cloud of dust back in the distance and their hearts sank for they knew that their slave masters had changed their mind and were coming to get them.

Fear almost overtook them but when all seemed lost
suddenly a pillar of smoke appeared at the front of the line.

And they all understood that it was the very presence of God.
When the night grew dark the pillar of cloud became a pillar of light.
It comforted them and it calmed their fears and it showed them the way to freedom and faith.

This is the story of how God led His people out of Egypt and it is an incredible testament to God’s love His protection and His providence.

In fact all the readings we just heard remind us of God’s loving providence.

When God said “let there be light he led all of creation from darkness into light.”

As we saw God led his people from slavery to freedom.
He led them through the darkness of desert.
He led them to the promised land.

And over and over again when they  and we would wander
into the darkness of sin
He led them and us to back to righteousness.

The story of our salvation reminds us that God is always with His people
even at their darkest and most frightening moments even in our darkest moments.

Our  history with God should convince us that He is always leading us.
Like the flame of this candle led us into this Church.
Like the flame as Israelites crossed the red sea.
God always shows us the way.

And so all of the readings we just heard have common themes.
They remind us over and over and over again
That God loves us and all of humanity.
That God is faithful
and if we follow him he will guide us home.

The women in the Gospel loved Jesus
They loved Him so much that they could not even think of leaving his body in the tomb without anointing it.

They were probably upset that they were unable to anoint His body before the Sabbath.
They longed to do this one last thing for Him.

They went to the tomb even though they weren’t sure how they were going to accomplish their task.

They weren’t sure if the Roman guards would let them in.
They weren’t sure how they were going to roll back the heavy stone.
They were aware that the Jews were looking for anyone who followed Jesus and that must have been frightening.

Remember the disciples (the men) were so afraid that they were in hiding.
But the women went anyway.
They were not deterred.
Their love compelled them to go.

And when they arrived they saw that God had taken care of all of the obstacles
the stone was already was rolled away
and that the tomb was empty.

When they met the men dressed in dazzling white garments
they heard that Jesus was alive their hearts dared to hope again.

After that incredible encounter they did not return to their homes
or keep the reason for their new found hope and joy to themselves,
but they went back the apostles.

And they shared what they had seen and heard even though as the Gospel said it seemed like nonsense.

Peter the sinner,
Peter the betrayer,
Peter the impulsive one,
Peter the great leader who was also hiding for fear of the Jews
Peter was also compelled by love to take a risk and he left the room.

He wanted so desperately to believe what the women had said.
and because of the risk he took he too was rewarded
with the same startling experience.
The experience of Jesus’ resurrection

Our encounter with God’s word tonight is very important.
There are not many opportunities for us as a community to reflect on all of the readings of the Easter Vigil.

So often we too seem to be lost in the darkness.
So often we don’t know where to turn or where to take the next step.

Sometimes when we face a new challenge or opportunity
just like God’s people we are filled with fear and apprehension.

We might be faced with the darkness of an habitual sin or addiction,
we might be faced a difficult job or marriage,
Maybe our challenge is a child we just can’t figure out how to love,

We might be filled with apprehension as we approach or wedding day or begin a new job.

In moments like this we need to hold on to the witness of God’s long and loving relationship with humanity.

God’s long and loving relationship with us.

We need to see that God is always present.
We need to search for His light and remember
He will always guide us.

Like the women in the Gospel sometimes we know what we have to do
but we aren’t sure how we will be able to accomplish it.
We know where love calls us but we also know there are so many obstacles.

Maybe We know our temper is not of God but we can’t figure out how to change it.

We know that we have to be more generous but it is just so hard to open our hands in generosity.

We know that in order to be better people we have to give God more time in our lives but there are so many things,
even worthy things, which call for our attention.

Like the women stepped out in faith without fear.
We have to be willing to step out in faith.

If the women had let all of those obstacles or their fears hinder them or discourage them.
They would never have known that Jesus had risen from the dead.

When I got on a plane not to long ago… the Stewardess said to me… Lucky you
When I asked here why she said… you get two seats…
I responded why the plane looks really full.. and she said. No one sits next to priests anymore.
(Difficult times indeed)

If we step out into the unknown
we too will find the tomb empty and like the women in the Gospel our hearts will be filled with anticipation and Joy.

Strengthened by our encounter with the living Word of God

And challenged by the example of these 6 fine people who are seeking entrance into our Church even in these difficult times.

Let us always be willing to proclaim the reason for our hope. 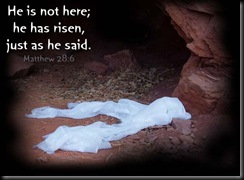 Beautiful, thank you for sharing.