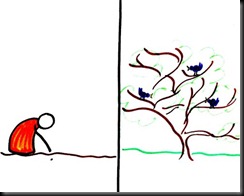 Once when I was a boy ( I know centuries ago) our scout troop was sent to camp out under the stars so that we could earn The Order Of The Arrow.

There were no leaders with us they stayed at the base camp.

It was really cold out and damp and we were trying to build a fire.

Rashly we used up all of our matches and the fire was only a few smoldering embers.

We were all disgusted because we were afraid we would be sleeping in the cold without the benefit of a fire.

When all the big mouth kids, myself included, gave up this quiet kid went over to what was supposed to be our fire.

As we all complained and blamed each other, he very slowly and gently built the few tiny embers left into a big fire.

It took time, skill, a lot of persistence and patience. He was a hero.

Faith is a gift from God. God gives it freely and in the end God gives the possibility of faith to every human being because God loves all of us and God longs for all of us to be saved.

Over and over again in our life we experience little moments of faith little epiphanies or glimpses of God.

If left alone they will slowly fade away like the embers of a fire.

But if patiently fanned, fed and nurtured those little experiences of faith, many the size of a mustard seed, can grow into a raging fire which can sustain us in the dark and cold of the night.


When a person says I have no faith,
Or when my own faith seems weak,
I usually ask myself how I or we have nurtured our faith today?

How can we expect to have a life of faith when we don’t meditate on the Word of God?

How can we expect to live a life of faith if we are not fed at the table of the Lord?

How can we expect the consolation of faith if we don’t notice our brothers and sisters in need?

I realize I am preaching to the choir you are here in the pews trying to live your faith.

But the point is still valid for all of us… myself included.

If we want to be sustained by our faith we have to patiently, lovingly, nurture it like that young man who built a raging fire from a few embers ready to go out.

Looking at the question of faith from an different angle sometimes we have  to remind ourselves that God uses us to bring others to faith.

Or in other words sometimes we are the embers.

Our compassionate forgiveness…
our random unexpected acts of kindness…
our good example…
Can all bring a person to faith….

One day I went to celebrate Mass at 9:00 PM in St. Vincent’s Chapel

There was a whole row of gumbas there.

I only recognized one of them, the others I had never seen before.

I greeted them all warmly and told them I was happy to see them.

After Mass I started talking to them and asked them what brought them to Mass.

They told me they that last weekend they had gone to the Jersey Shore to party and that is just what they did.

When they came to the next morning one of them was missing.
His stuff was there be he was gone.

They found him walking on a highway.. And when they asked him where he was going he said…

I have to go to Mass I never miss.

They were stunned… a couple even went with him the rest went back to bed.

When I saw them they had come to Mass the following Sunday because one of them said..

He’s a good kid and he obviously he knows something that we don’t know.

I never saw a most of them again

But one of those kids  became a regular and never missed mass again.

The example of young man who was walking to mass was like the mustard seed.

All of us have the chance to share our faith in simple loving humble, non preachy ways
Non- Preachy ways…

What was that saying of St. Francis
Preach the Gospel always use words only when necessary.

The world would be a better place if we all did.
Jesus made an important point today..

Even the tiniest amount of faith the size of a mustard seed.
Can change the world…

The disciple wanted more faith… do we ?