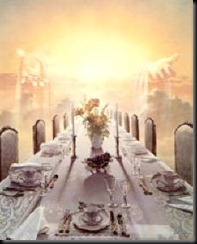 Both this week and last week we heard Jesus reach out to the religious leaders of his time with an almost desperate voice, a desperate love.

He knew how much they were entrenched in their sin
and he longed to call them to conversion.

He loved them.
(Sometimes you yell the most at the kid you love the most)

Last week the religious leaders of his time were represented as the unfaithful tenants in God’s vineyard.

They were the ones who refused to listen to the prophets and even killed the Son.

This week the religious leaders they were the invited guests to the wedding banquet.

It was the custom of the time to send runners out with invitations Informing the invited that there would be a wedding feast soon and to get prepared.

When the meal was ready (no microwaves back then)
the runners would return to bring back the guests.

The guests (the Jewish people and religious leaders of his time) knew that they were invited.

They knew they were the chosen people.
They knew that it was a special occasion
and theirs was a privileged place.

They knew that had even received several invitations
God had invited them to fellowship over and over again in their history.

Yet somehow and they refused.
They were busy.
They were otherwise concerned
one went to his business, another his farm,
some even beat up those bringing the invitation.

The guests were being invited into happiness
Into joy.

They were being invited into friendship and fellowship with God.
What kept them away?
Why did they refuse ?

The answer is probably different for each of them.

Some were too focused in the moment
they were probably overwhelmed by what was happening at that moment in their lives.
(That happens to all of us some time)

Some just were not interested
They were betting on themselves
they thought that they had a good life already
they didn’t believe that the banquet would be better.

So the king invited a whole other group of guests
People who never thought they would get an invitation.

They were the outcasts
the religiously incorrect
the sinners, the broken ones
those burdened with addictions,
the bandits, the prostitutes, you get the picture.

He invited people who never thought they had a chance
and
when they received the invitation which they never expected
they responded.

They responded with a conversion of heart.

They did their best to leave their sad pasts behind them.

They trusted the king and they came.
They dared to hope for more.

They dared to hope for a better life a holier life.
And they even came properly attired For the feast
They came dressed with the desire to live virtuously.

Sadly one man tried come without this change of heart
He entered the banquet without being clothed in virtue
or even the desire of virtue.

He wanted the benefits of the Heavenly banquet without being willing to pay the price.

The King even approached him and asked him why he was not properly attired.

Probably in the hope that he could reason with the man
give him one more chance.

The Word of God is also addressed to us.

We have to ask ourselves…Which one of these characters in the this parable are we?

Which one?
All of us have been invited.

Have we accepted the invitation
or are we too busy?

You know the drill you find yourself thinking
I have so much to do.
so much is calling for my attention.

How many of us have found ourselves saying thing like
I want holiness
I want to life a virtuous life, a good life
but I don’t have time now.
(That’s what St. Augustine wanted.)

How many of us trust ourselves our world and our riches
more than God.

How many of us kind of say Yes I’ll come to the banquet but when I’m old and when I don’t have any better options.

Yes Today in this Scripture God speaks to us

God speaks to each one of us
with a kind of desperate voice
a desperate love.

He longs for us to enjoy the heavenly banquet.
Pray God we all say yes.