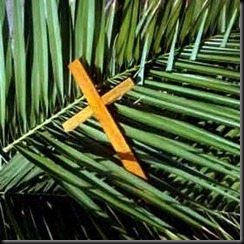 As we just heard in the powerful reading of the Passion Jesus encountered many people on his way to Calvary.

There was the crowd that welcomed Him to Jerusalem in triumph  then screamed crucified him when he stood before Pilate.

There was the woman who begged for forgiveness and anointed Jesus with expensive oil.

There was the anonymous man who gave Jesus and his friends the upper room for their last Passover together.

There were his disciples, his dearest friends, who filled with fear abandoned him  as soon as there was trouble.

There was Judas who was filled with a tragic mixture pride and died lonely and broken in despair.

There were the priests and the scribes and the Pharisees who only thought about themselves and were worried about their power and prestige.

There was the woman at the fire, a gossip, who taunted Peter to deny Jesus.

There was Peter who overcome with fear denied his dearest friend and wept bitterly because of it.

There was Pilate who didn't care about the truth but was only concerned about satisfying the crowd and keeping peace.

There were the Roman guards who cruelly made sport of Jesus and whipped and scourged Him.

There was Simon of Cyrene who when pressed into service helped carry the cross.

There were the people who taunted him as he hung in agony on the cross.

There were the women and the youngest disciple who remained faithful to him to the end.

My dear friends there is a little bit of each one of those people, in each and everyone of us.

Sometimes we care about the truth and sometimes the truth doesn't matter at all..

Sometimes we go with the crowd even when they are wrong simply because it’s easier.

Jesus knew each and every one of those people he encountered those last few days of his life and yet he loved all of them.

Jesus knows everyone of us,
and everything about us and he loves us too.

He loves us so much that Last Supper He gave us His Body and Blood in the Eucharist and He chose to die for us paying the price of our sins, a price which was not His to pay.

This week we have some unique opportunities to know more about Jesus and his love for us.

On Monday there are our Easter Confessions. I hope many of you chose to attend especially  if it’s been a long time since you’ve gone to confession.

I love giving someone absolution especially when they’ve been away from the sacrament a long time.

On Tuesday there is the Chrism Mass at the Cathedral my Dad always took our family to the Chrism Mass we never missed it. At this Mass the Archbishop blesses the oil for all of the sacraments celebrated in the coming year.

On Thursday we can mediate on Holy Eucharist and the saving power of humble service.

On Friday once again we can meditate on the cross it’s power over sin and death.

On Saturday we can keep vigil at the most sacred liturgy of the year the Easter Vigil.

This year our parish will have 2 baptisms and we will receive two fine young men into the Church.

If you’ve never been to the Easter Vigil I promise you, it’s beautiful and rich in symbolism, The Easter Vigil  is timeless and ancient, some of the prayer date back to the very beginning of the Church.

I encourage you to make your Holy Week Holy by participating in these most special moments in the prayer life of the Church.

May we walk together on these most holy days.
Amen