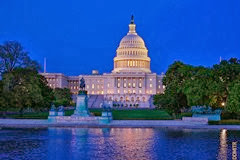 You know when I lived in Washington people would often come to visit and one of the first things we would do is get on the Metro or the Subway and go to see the sites.

Everyone wanted to see the Capitol Building, the White House, all of the monuments, and the war memorials.

Quite frequently our visitors would remark how beautiful Washington was and what a great country we have.

They were almost always taken in by the grandeur of the Lincoln Memorial or the beautiful reflection of the Jefferson Memorial on the tidal basin on a calm crisp night.

That’s pretty much what was happening in today’s Gospel.

Some of the Jew were looking at the Temple the center of Judaism and complimenting themselves on how beautiful it was and how great their nation was.

During the time of Jesus, life was ok in Israel, while not prosperous, it was at the center of trading routes and people were able to make ends meet.

Its rulers accommodated the Romans who occupied their country and the ruling class became quite rich from their accommodation.

The normal people were being pulled  between their rulers and religious leaders who were comfortable with the status quo and the Zealots who wanted the Romans driven out by armed insurrection.

Both sides viewed their position as God’s will.

In the end the Zealots would win over the country and in 40 short years after Jesus death they would start an insurrection or war with the Romans that would lead to disaster.

One historian states over a million Jews were killed by the Romans and  the beautiful Temple was be destroyed.

The Jewish people who remained were driven from their land and spread out all over the world.

Jesus knew what was coming

He knew that Jerusalem was headed for destruction.

He knew that the faith of his early Jewish followers would be shaken when it happened.

He knew that they would face persecution.

He knew all these things, and he warned both the people of his time and he warns us that a life of faith is not always going to be easy to live.

No one who has ever read the Gospel can say that Jesus didn’t warn us about the cost of discipleship.

There are so many similarities between our current situation and that of the Israel during the time of Jesus.

Like Israel during the time of Jesus, our country is indeed becoming more and more polarized.

We are polarized on key fundamental issues like the economy and health care, marriage and immigration the list goes on and on.

We are becoming so polarized in fact that sometimes it almost seems that our government has stopped functioning. We all remember the shutdown.

With the fall of Jerusalem the Jewish people and the followers of Jesus suffered religious persecution.

Right now  I believe that our religious beliefs and our religious freedom are slowly being pushed aside by a culture which is growing more and more secular and has less and less room for God.

Try and say Merry Christmas in public and see the reaction.

Fr. Raymond lamented that he went to a card store and could not find one religious Christmas Card.

You know I have this little trick when I go into any store that sells computers. I pull up our parish website and walk away in the hope that someone will see. it

Once I went to a computer store and tried to pull up our parish website on I could not.

When I questioned one of the associates he said that they block all religious sites like they block pornography because they don't’ want to offend anyone.

Personally I believe that in the future it will be more difficult for our children to practice their faith.

I also believe that religious indifference or even persecution will grow more and more prevalent.

In the light of all these things today’s Gospel reminds us to not waiver in our commitment to God and not to lose hope or faith.

We all know how the story ends, good wins and evil loses.

Let us remain steadfast in our beliefs and true to our faith not matter what the cost.

For Jesus warned us about all of these things before they happened and challenged us not to let them shake our faith.

Let us always be true to God’s word

Let us love the world even when it persecutes or marginalizes us.

Let us never forget the poor and open hearts and our resources to those in need.

For Jesus said “by your perseverance you will secure your lives."