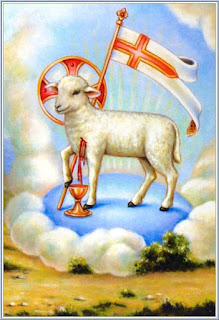 Reading 1Responsorial PsalmReading 2Gospel
May the Peace of Christ Reign in our hearts.


When the Angel Gabriel announced to Mary that she would bear God’s Son
the first thing she did was run to her dear friend and cousin Elizabeth.


When Mary arrived Elizabeth the mother of John the Baptist promptly proclaimed
“The baby in my womb jumped for joy.”


Tradition has it that John and Jesus were somehow related.
They had probably known each other for years.


So in today’s Gospel it almost seems strange when John the Baptist says did didn’t know Jesus.


What we have to conclude is that he wasn’t sure  about the role that Jesus was to play in God’s plan.


When he saw the descent of the Holy Spirit on Jesus in the Jordan
John understood that Jesus was indeed the Son of God
and he began a process of discipleship which every follower of Christ
and every human being is called to follow.


Once he understood who Jesus was
John  began surrender himself,
his will,
his plan,
even his friends and his disciples
to Jesus and God’s will.


John’s generous gift of his life to God and to Jesus
was summed up in a simple phrase  I must decrease he must increase.


The first step in John’s discipleship was to announce to the world
who Jesus was
and how he would bring salvation to the whole world..


To do this he used a simple but profound phrase


“Behold the Lamb of God”


When John’s disciples or the people along the Jordan heard that phrase they would have thought many things.


First of all they would have remembered the Passover, when the Hebrews sprinkled the blood of a lamb on the door of their houses in Egypt to escape the Angel of Death.


And they would have understood that only by following Jesus can we be delivered from from eternal death and enjoy eternal life. Just like the blood of the lamb spared the Israelites from destruction only Jesus the Lamb of God can guide us into heaven.


The second thing that would have popped into the heads of the people hearing that phrase was the sacrificial lambs which were offered as sin offerings every day in the temple.


Some days there were thousands of Lambs offered in atonement for sins..


By calling Jesus the Lamb of God
John was teaching his followers that the ministry of Jesus would include suffering.


That just as the lambs are slain in the temple to atone for sin
Jesus the Lamb of God would lay down his life to atone for our sins.
Many hearing John’s words still believed that the messiah would be a great earthly king
It would take a while for the true nature of Jesus’ ministry to sink in.

The phrase Lamb of God had such an impact on the church that God inspired the writer of the Book of Revelation to use it.


When the Book of Revelation was written during the great persecution of the early church the author of the book referred to Jesus as the victorious lamb.


In the vision which was shared with the author of the Book of Revelation the wounded lamb stands before the throne of God victorious, having conquered death and sin.


The Lamb once slain will live forever
The message to the early infant Church and the message to us is that just as the Lamb  of God  was victorious in the end, we can be assured that good will win, good will triumph even when it doesn’t seem possible.


Now over almost 2000 years later the title Lamb of God should invoke in us the same kind of excitement and wonder.


Because of the Lamb of God our sins are forgiven and we are all challenged to live our lives for others.


When John had discovered the truth about Jesus his whole life was changed
It no longer centered on his mission or his ministry
or his wants and desires
but rather on following the Lamb of God in loving service of our Brothers and Sisters.


We all need to ask ourselves how much of my life is about what I want and what I need.
Have we said or can we say like John the Baptist


I must decrease He must increase.


Are we willing to put God’s will and the needs of our brothers and sisters first?


That means participating in the life of the Church  above and beyond simply coming to Mass out of habit.


Lamb of God who take away the sins of the world


Have mercy on us.